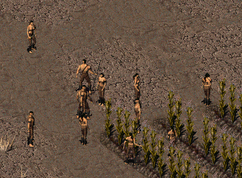 The slaves in the Den slave run are those being prepared for a life of servitude in 2241.

These slaves are captured tribal and nomad men and women; some are fearful others are angry. Either way, their slaver escorts are taking them to be sold as slaves to Metzger.

Retrieved from "https://fallout.fandom.com/wiki/Slave_(Den_slave_run)?oldid=3350430"
Community content is available under CC-BY-SA unless otherwise noted.