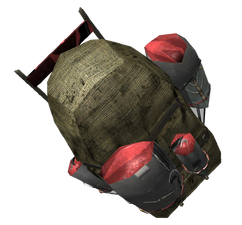 Slave's Burden is a weapon which was cut from Fallout: New Vegas.

Slave's Burden resembles a large backpack with 4 smaller containers attached to it. Going by the name, appearance, and the fact that it is classified as a weapon, it was to be worn by slaves and contains flamer fuel packages.

The Pip-Boy displays the flamethrower icon.