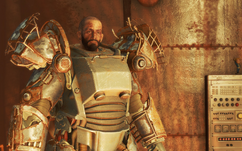 Here There Be Monsters
Out of the Fire

“I'm Slag, and we are the Forged. And you, stranger - you're somebody with some guts. I like that.”

Slag is the leader of the Forged, a fanatical gang of fire-worshiping raiders established in the Saugus Ironworks in 2287.

Slag is the leader of the Forged and is originally from outside the Commonwealth. When first accepting recruits, it was a slow process, as many of the recruits died early in the trials.[1] At some point, he engaged in conflict with the Gunners and killed many notable members, or convinced them to pass the trials. Eventually, negotiations were reached, ending the conflict, as well as inspiring more people to join, and prompting the Forged to remain in the region.[2] By the time the Sole Survivor reaches the Ironworks, he has a strong, well-equipped raider army. However, scrap iron shipments had stopped, limiting the effectiveness of the facility, prompting him to send Bedlam to Dunwich Borers to obtain more.[3]

He wields Abraham Finch's Shishkebab sword, given by Jake Finch as a bribe to gain his favor in order to join the Forged.[4]

If the residents of Finch farm are killed before entering Saugus, Jake Finch will be found standing just outside the blast furnace with Slag and the other forged inside remaining friendly (albeit with no dialogue).

Slag appears only in Fallout 4.

Slag is a byproduct from the process of smelting to separate a metal from its ore.

Retrieved from "https://fallout.fandom.com/wiki/Slag?oldid=3295578"
Community content is available under CC-BY-SA unless otherwise noted.