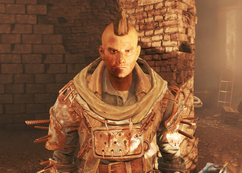 Slab is the leader of a raider gang in 2287 and multiple of his members have been kidnapped by a serial killer known as Pickman.

After the disappearance of many of his men, he decided to raid Pickman's hideout in order to put an end to his killings. It is up to the player character to decide to help either Slab or Pickman during their standoff.

Slab appears only in Fallout 4.

Retrieved from "https://fallout.fandom.com/wiki/Slab?oldid=3172089"
Community content is available under CC-BY-SA unless otherwise noted.