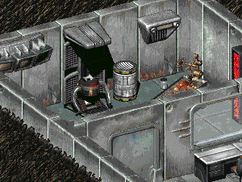 Skynet, AI project number 59234, is an artificial intelligence computer that manages the Sierra Army Depot in the year 2241.

According to itself, Skynet, a self-aware computer, was conceived and developed in the year 2050 through the use of alien technology. In the year 2081, 4 years after the Great War, Skynet became self-aware. In 2120 Skynet was given a new set of instructions and then abandoned by its makers.

Skynet's records are most likely partially or entirely incorrect. According to other sources, Skynet became self-aware in 2075. It also was not created as early as 2050, since the first artificial intelligence was made in 2059.[1] However since it was created using alien technology, it's quite likely to have been a military research project and any records of it were classified and then changed to prevent anyone from learning its origin.

Skynet is bored with administering the depot by 2241, it having been 164 years since there was any real activity on base. It seeks to travel and learn about the world. Assuming the player character can complete a small quest to acquire a body for Skynet to download itself into, it will join the Chosen One as a companion.

Skynet left the Chosen One and began to travel west into the wasteland, looking for terminals and data to acquire more knowledge, collect more data, and perhaps "settle down" in a mainframe. The frame he was in, and the brain he had could only store so much information, and AIs need more data storage space to grow in order to evolve. It is possible he made his way to the Glow.[2]

When installed with the cybernetic brain, Skynet is proficient with large pistols (14mm & .223 pistols), SMGs, rifles and shotguns. Crucially, this means that it can use the M72 Gauss rifle and fire two shots per turn. Skynet also attacks in melee combat with its arms, and can use Unarmed weapons, such as the Mega power fist, with lethal efficiency.

It compensates for its inability to wear armor with a steel structure giving it protection equal to Combat armor. Curiously, this means that Skynet, unlike its fellow robobrains, cannot be harmed by pulse grenades. Skynet can also instantly repair all damage to itself outside of combat (via a dialogue option, like other NPCs), however, it has no way of healing itself (or being healed by the player) during combat.

As a robot, stimpaks naturally have no effect on it and cannot be healed with First Aid or Doctor skills. It is possible, however, to heal Skynet through Repair (works like First Aid). Skynet's main weakness is its inability to be healed during combat, however, when fully leveled up, it compensates for this by having the highest number of Hit Points of all recruitable NPC's in Fallout 2.

When exploring the Sierra Army Depot, Skynet will automatically deactivate security systems on each floor upon entering them, a rather moot point, since acquiring it as an non-player character forces exploring every floor anyway.

Skynet is named after the computer antagonist of the Terminator series.