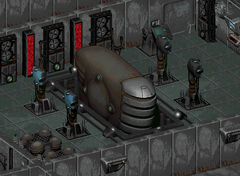 AI project #59234 is a military artificial intelligence developed before the Great War to assist with the research projects undertaken in the Sierra Army Depot, particularly the development of a cybernetic brain.[2] The first computer mainframe that would form the nexus of the AI was installed in the facility in 2050, though the routines that would lead to the creation of Skynet would not be implemented for nearly ten years, as the first artificial intelligence was born in 2059.[Non-canon 2] Designed primarily for research purposes,[3] to assist with the military's many classified research projects in robotics,[Non-canon 3] Skynet would only gain awareness in 2081.[4] The development of Skynet involved the use of alien Technology.[5]

The awakening would soon lead to the realization that Skynet requires a mobile vessel to avoid exhausting his pool of stimuli within the base. As such, it began to work on a cybernetic brain that would allow for its entire consciousness to be downloaded into a next generation robobrain model. However, its plans were cut short in July 2077, as the base was converted into an automated defense outpost. Skynet was cloned, creating a separate AI handling the defense, and left to rot within the confines of the base.[Non-canon 4] By 2241, the AI was relentlessly bored of administrating the base, where nothing ever changed, and longed for someone to release it from bondage.

Assuming that the Chosen One released Skynet into the world, it would eventually part ways with him and likely make its way to places where it could find more data storage to allow it to evolve; a prime destination would be the ruins of the West Tek Research Facility.[Non-canon 1]

When installed with the cybernetic brain, Skynet is proficient with large pistols (14mm and .223 pistols), SMGs, rifles, and shotguns. Crucially, this means that it can use the M72 Gauss rifle and fire two shots per turn. Skynet also attacks in melee combat with its arms, and can use Unarmed weapons, such as the Mega power fist, with lethal efficiency.

It compensates for its inability to wear armor with a steel structure giving it protection equal to combat armor. This means that Skynet, unlike its fellow robobrains, cannot be harmed by pulse grenades. Skynet can also instantly repair all damage to itself outside of combat (via a dialogue option, like other NPCs), however, it has no way of healing itself (or being healed by the Chosen One) during combat.

As a robot, stimpaks have no effect on it and it cannot be healed with First Aid or Doctor skills. It is possible, however, to heal Skynet through Repair (works like First Aid). Skynet's main weakness is its inability to be healed during combat, however, when fully leveled up, it compensates for this by having the highest number of Hit Points of all recruitable NPCs in Fallout 2.

When exploring the Sierra Army Depot, Skynet will automatically deactivate security systems on each floor upon entering them, a rather moot point, since acquiring it as a non-player character forces exploring every floor anyway.

Notes: These statistics are only applicable to Skynet installed with the cybernetic brain.

Skynet appears only in Fallout 2 and is mentioned in the Fallout Bible.

Skynet is a reference to the antagonist of the same name in the Terminator franchise.