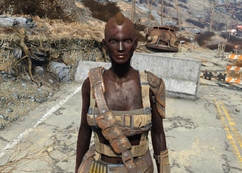 Skrap Rat is a raider masquerading as a scavenger found in the Commonwealth during the BOS patrol vs raiders random encounter in 2287.

Skrap Rat is the leader of a small group of raiders masquerading as scavengers that roam around the Commonwealth. She and the rest of her group will be hostile towards the Sole Survivor should they meet. In a letter that may be found on one of the scavengers, she explains that she will kill any stranger she meets, stating it is for the good of the group's safety.

Skrap Rat appears only in Fallout 4.

Skrap Rat and her gang
Add an image to this gallery
Retrieved from "https://fallout.fandom.com/wiki/Skrap_Rat?oldid=3202129"
Community content is available under CC-BY-SA unless otherwise noted.