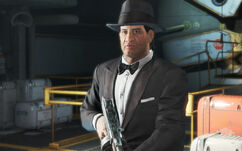 “Should've left it alone, Nicky. This ain't the old neighborhood. In this vault, I'm the king of the castle, you hear me!?”

Skinny Malone is the leader of the mobster-themed Triggermen gang headquartered at Park Street station in the Boston Common in 2287.

Skinny Malone and his crew inhabit the station and the Vault-Tec vault (Vault 114) located underneath. Although he is very short-tempered and relies on the comfort of the women he's with, he is still hesitant when it comes to decision-making, especially if a woman leaves or doubts his integrity.

Like the other Triggermen, Malone has based his appearance and persona on that of old pre-War Chicago mobsters. He is known to keep a "black book" of people whom he is angry with, with three strikes across the name meaning the person is likely to be killed. According to Nick Valentine, Malone was a small time player who was eventually driven out of the "old neighbourhood" by more powerful gangs.

Malone has an old rivalry with synth detective Nick Valentine, but despite this the pair have a measure of respect for each other. Out of respect for his old rival, Malone orders Valentine to be held captive rather than killed outright when the detective is captured while attempting to retrieve Malone's most recent lover, Darla. Valentine had been hired due to Darla's parents' mistaken belief that she had been kidnapped, rather than having run away to be with Malone.

* At higher levels, Malone carries an assault rifle instead of a submachine gun.

Skinny Malone appears only in Fallout 4.

Skinny Malone seems to be an homage to the gangster Al Capone, who lived like Malone, down to their weight and owning an iconic underground vault. Malone's gang claims Vault 114 as turf, while Capone had a clandestine vault built under Chicago's Lexington Hotel, which was famously opened in a widely-viewed 1986 TV special, in which, ironically, nothing important was found at all. His last name may also be a reference to Bugsy Malone.

Occasionally, there will be a glitch that renders Malone invincible, despite the V.A.T.S. system showing him being attacked. This may be solved by saving the game and reloading it, or killing him via console commands. [verified]

Retrieved from "https://fallout.fandom.com/wiki/Skinny_Malone?oldid=3256324"
Community content is available under CC-BY-SA unless otherwise noted.