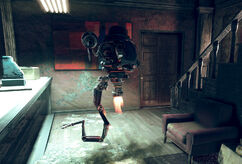 Skinner is a Mister Handy working at Duncan & Duncan Robotics in 2103.

Skinner served the Duncan brothers during their time alive, but at some point, James Duncan became senile with believing his brother was still alive, but when Skinner pointed this out, James thought he was malfunctioning and had him retrieve his tools to fix him.[1] After James Duncan died, Skinner was left in charge of the store, with orders that anyone who came in to request an Assaultron had to be turned away unless they were members of the United States Armed Forces, especially with the rank of General. Since then, he mistakes anyone who comes in as possibly being a ghost or restless spirit due to Summersville being abandoned after the Great War.

By the year 2103, one year after Vault 76 opened on Reclamation Day, Skinner is still running the shop, but appears to have lost the front armor covering his main circuitry. When the Vault Dweller arrives to find a new body for Polly over at The Wayward, Skinner is initially forced to refuse them due to the Assaultrons being all ordered by the U.S. military. If the resident has completed Officer on Deck with MODUS and become a General, they can tell Skinner they are there on behalf of the U.S. military to pick up an Assaultron, and he'll give them the keycard to access the Assaultron showroom. Afterwards, he will apologize for the mix-up, mentioning that it is so hard to identify rank these days.

Skinner appears only in Fallout 76, introduced in the Wastelanders update.

Retrieved from "https://fallout.fandom.com/wiki/Skinner_(Wastelanders)?oldid=3417505"
Community content is available under CC-BY-SA unless otherwise noted.