Gain a perk every 4 levels

+5 additional skill points at level up

“Since you spend more time improving your skills than a normal person, you start with better skills levels. The tradeoff is that you do not gain as many extra abilities. You will gain a perk every four levels.”— Fallout description

You gain +10% to all skills but gain a perk every 4th level instead of every 3rd level.

You gain +5 skill points per level but gain a perk only every 4 levels instead of every 3. 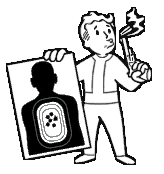 “You're skilled, but not experienced. You gain +5 points to every skill, but you suffer -10% from experience gained from now on.”— Fallout: New Vegas description

You gain +5 to all skills, but you gain 10% less Experience Points.

The image in the Fallout: New Vegas add-on Old World Blues is a modified image of the Center of Mass perk.