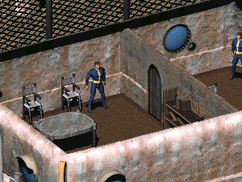 “If you're not born a Citizen, then you have to take a test to become a Citizen. Number of Outsiders that have taken the test and become Citizens? Zero. Your chances? LESS than zero.”

Skeev is a young citizen and assistant customs official of Vault City in 2241.

A scrawny young man with darting eyes, Skeev is Wallace's assistant[1] at the Vault City customs office. Though one would expect that this position of responsibility would require a loyal, honest bureaucrat, Skeev is the exact opposite. He is a small-time crook, his penchant for extralegal activities drives him, seeking to fill his coffers at the expense of the city. Sometimes, however, he is gracious and doesn't abuse the system, merely delivers servant candidates to Barkus. Usually poor, mentally handicapped wastelanders he picks up to Barkus for a "finder's fee."

Skeev appears only in Fallout 2.

Retrieved from "https://fallout.fandom.com/wiki/Skeev?oldid=3423599"
Community content is available under CC-BY-SA unless otherwise noted.