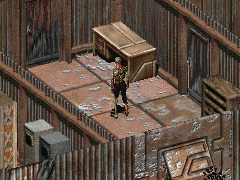 “Thanks for fixin' up our atomic reactor. It shore needed some work. I woulda show'd 'em how, but they don't trust me in there any more. They got that idjit loudmouth Festus doin' all the work now.”

Skeeter is a "ghoul gadgeteer" who serves as a mechanic for Gecko in 2241.

Skeeter is a grubby but intelligent-looking ghoul, wearing greasy overalls with a micrometer sticking out of his pocket.[1] He is considered unreliable by the ghouls who administer Gecko's supply locker/storage room, since he once caused a fire, and as such he is typically denied part requisition forms. He is assisted by "Lumpy" John, a human refugee from Vault City who has no visible mutations like the ghouls, but is considered unacceptably mutated by the citizens in Vault City because of his unusual resistance to radiation.

Skeeter upgrades weapons. A free upgrade can be obtained from him by fetching the 3-Step plasma transformer.

The base prices of the upgrades are:

If looking for weapon upgrades, Valerie in Vault City offers the same upgrades at much lower prices.

Skeeter appears only in Fallout 2.

Retrieved from "https://fallout.fandom.com/wiki/Skeeter?oldid=3418178"
Community content is available under CC-BY-SA unless otherwise noted.