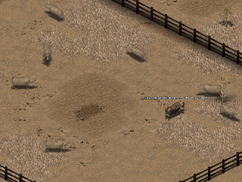 I see dead brahmin... all the time

Sixth Sense is a special encounter in Fallout Tactics.

In this encounter, a wounded brahmin named Cole is found in a large pen with seven "ghost brahmin." Cole has 50 Hit Points and has a trample attack. The "ghosts" have 40 HP, and a basic punch attack, cannot be killed, and will not turn hostile even should Cole be killed.

The Warrior does not have their vehicle in this encounter, but will get it back upon leaving the immediate area.

This encounter is a spoof of the movie The Sixth Sense.

Retrieved from "https://fallout.fandom.com/wiki/Sixth_Sense?oldid=2848410"
Community content is available under CC-BY-SA unless otherwise noted.