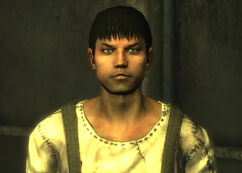 “Never look a gift slave in the mouth, I say.”

Sister is a short-tempered, aggressive man, and on the brink of being thrown out of the city by Harkness or Danvers. Although he has not committed any crimes bad enough to be exiled, most of the citizens of Rivet City stay clear of him if they can. He also refuses to answer any questions about his unfitting nickname.[1]

At Eulogy Jones' request, he is in Rivet City to capture an escaped android. However, Sister has grown to like living in Rivet City, for which he has abandoned this mission indefinitely. Despite now being a permanent resident in Rivet City, he rents a hotel room and can often be found sitting in the hotel lobby.

Sister appears only in Fallout 3.

Retrieved from "https://fallout.fandom.com/wiki/Sister?oldid=3363326"
Community content is available under CC-BY-SA unless otherwise noted.