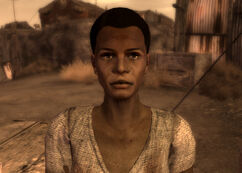 Powder to the People

Siri is a Legion slave living at the Fort in 2281.

Hailing from a small settlement in New Mexico, Siri was enslaved around 2278 in a Legion raid.[1][2] She was training to become a medical doctor, but never managed to complete her studies due to her enslavement.[3] However, her skills made her a valuable asset to Caesar's Legion, as she knows basic first aid and can create basic tribal remedies to treat illnesses and injuries. This was found to be useful in a culture that forbids more advanced medicine.[4]

As a slave, she has seen first hand what the Legion does to those who try to run away. This fear has kept her from trying.

Powder to the People: When talking to her, the player character can gain some XP and Legion fame by passing a Survival check of 20 in which they help her improve upon her recipe for creating healing powder.

Siri may disappear from the game for no apparent reason. A possible fix for this bug may be to use the console commands prid 11fbbd, disable, enable, resurrect and moveto player, in that order. This will revive Siri and place her where you are, allowing you to talk to her.

Collector's edition playing card
Add an image to this gallery

Retrieved from "https://fallout.fandom.com/wiki/Siri?oldid=3283643"
Community content is available under CC-BY-SA unless otherwise noted.