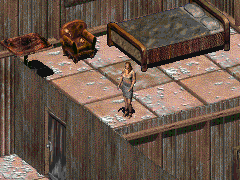 “Oh, baby, I understand. You gotta run home to momma. Well, come back here when you need some luvin'!”

Sinthia is a prostitute in Junktown's Crash House in 2161.

Sinthia works for Gizmo, the crime lord of Junktown. If the Vault Dweller spends a night in the hotel, then Sinthia will be taken hostage by a raider.

Sinthia appears only in Fallout.

Retrieved from "https://fallout.fandom.com/wiki/Sinthia?oldid=3370712"
Community content is available under CC-BY-SA unless otherwise noted.