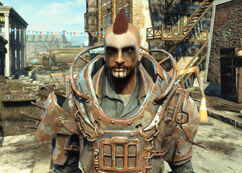 “You! You the Nuka-World wastepile that thought you could move your gang into Sinner's territory and live?”

Sinner is a character who appears with the Nuka-World add-on in 2287.

Sinner is a raider leader in the Commonwealth, being rather possessive of his territory. He leads his men against any he considers a rival on his turf.

Depending on choices, Sinner and his crew may try to start a fight with any of the Nuka-World raiders under the Sole Survivor's leadership. He can either be talked down or be killed in an all-out gang war.

Sinner appears only in the Fallout 4 add-on Nuka-World.

Sinner with his raiders in front of Jamaica Plain
Add a photo to this gallery
Retrieved from "https://fallout.fandom.com/wiki/Sinner?oldid=3480729"
Community content is available under CC-BY-SA unless otherwise noted.