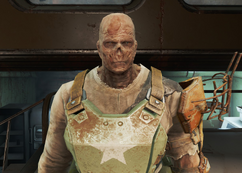 Sinjin is a ghoulified raider leader in the Commonwealth in 2287.

The Sole Survivor has to confront him as part of the quest the Silver Shroud as the final boss. After they decide to help Kent Connolly in his mission to bring law to the streets of Goodneighbor by killing some minor agents of his, Wayne Delancy and AJ, Sinjin orders Northy and Smiling Kate to flip the tables and kill the Shroud.

Unfortunately for him, the Sole Survivor kills both of them as well. As revenge, he captures Kent in Goodneighbor and takes him to his hideout in the Milton General Hospital. Sinjin holds Kent captive until he is killed by the Sole Survivor.

Sinjin appears only in Fallout 4.

Unlike other ghouls, Sinjin speaks rather clearly, with a stereotypical Boston accent.

Add a photo to this gallery
Retrieved from "https://fallout.fandom.com/wiki/Sinjin?oldid=3436950"
Community content is available under CC-BY-SA unless otherwise noted.