The single shotgun is a weapon in Fallout: New Vegas.

The single shotgun is available to the player character at the lowest levels of the game and has the highest single shot damage of the four. Though it only carries a single round of ammunition, it has a fast reload speed that allows multiple shots in a single V.A.T.S. round and is quite accurate for a shotgun (however it does use an extensive amount of Action Point cost of 45 AP), with the second lowest weapons spread after Dinner Bell.

The single shotgun can fire a total of about 995 standard rounds from full condition before breaking.

The receiver, when viewed in 3rd-person, appears to have an iridescent coloring to it. 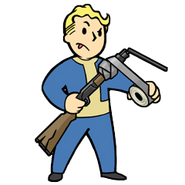 Single shotgun in the achievement icon for Jury Rigger 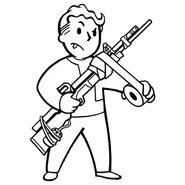