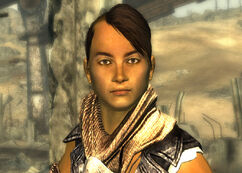 “I shoot nosy people. What the hell do you think I do? I protect this place.”

Simone was part of a mercenary crew before slavers took her. She was a slave for only seven months, feigning obedience and escaping as soon as the opportunity presented itself. As a former mercenary, she is very comfortable with weapons and fighting, and possesses the highest combat skill out of all of Hannibal's followers. She is a rough and tough person, with a total lack of respect for almost anyone except Hannibal.[2]

* Only after arriving at the Memorial, by siding with the slaves.

Simone Cameron appears only in Fallout 3.

The character's name is a reference to Simon Cameron, who served as President Abraham Lincoln's Secretary of War from 1861 to 1862.

Retrieved from "https://fallout.fandom.com/wiki/Simone_Cameron?oldid=3276481"
Community content is available under CC-BY-SA unless otherwise noted.