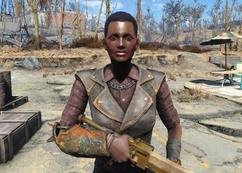 Simone is the bodyguard of Wolfgang in the Commonwealth in 2287.

Simone, along with Wolfgang, appears at Drumlin Diner the first time the Sole Survivor arrives there. They threaten to fire upon Trudy, the merchant who set up shop, due to her son Patrick's debt with them over his Jet habit.

If still alive, Simone will later be found in Goodneighbor if Wolfgang was killed. She will immediately be hostile to the Sole Survivor.

Simone appears only in Fallout 4.

Retrieved from "https://fallout.fandom.com/wiki/Simone?oldid=3343630"
Community content is available under CC-BY-SA unless otherwise noted.