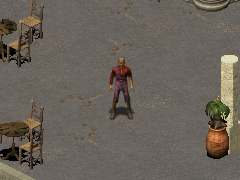 “What do mean she's dead? That's impossible! She's only twenty years old. Oh, Adele! *sob sob sob* What? *sniff* Of course I believe you. But why did he have to kill her? Why? I... I need to be alone now. *gurgle*”

Simon Dudley is a citizen of Cold Water in the year 2197.

He has a sister named Adele Dudley. When Guldo Sciavo and his gang took over the town, one of the bandits tried to rape his sister.

Simon encountered the Warrior in Cold Water, and while at first mistaking him for another bandit, he later realized who he was and asked him for help. He was very thankful when the Warrior killed the bandit and freed his sister.

When spoken to for a reward, Simon tells the Warrior that this is all he has. Apparently he has nothing because that is your exact reward for this side quest: nothing.

Retrieved from "https://fallout.fandom.com/wiki/Simon_Dudley?oldid=2751306"
Community content is available under CC-BY-SA unless otherwise noted.