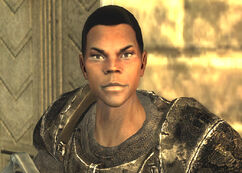 “You can always tell a rookie. You look too eager. Give the job a few hours, and the shine'll come right off.”

Simon is the door guard and face of the Van Graff family living in Freeside in 2281.

Simon has been with the Van Graff family for a couple years and is responsible for guarding the door at the Silver Rush. His duties include weapon checks and turning away drunks and addicts while keeping a very professional, authoritarian attitude. Simon likes to use a laser rifle, because of the superior speed of its projectiles, but Gloria wants at least one guard to use the plasma rifle (since the visual appeal draws in customers), so Simon is equipped with a plasma rifle instead.

If a save is done and afterwards Simon attacks the player, caused by the player attacking a civilian in Freeside, a bug may appear in a reload of previous save where Simon still attacks the player without said civilian attack performed. This causes the player to automatically fail the Birds of a Feather quest. [verified]