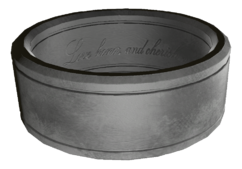 The silver wedding ring is a piece of handwear in the Fallout 4 Creation Club content "Shroud Manor."

The silver wedding ring appears Identical to the normal wedding ring, except it is colored silver instead of gold.

During Shrouded Manor, it can be found in the basement vault of Shroud Manor in the kitchen room on a small table next to Candy's holotape.

If the ring is picked up before reading the entry on Trevisani's terminal that adds "Find the wedding ring" to the player's miscellaneous quests, it will be impossible to remove, since the quest's completion requires picking up the ring, which can't be dropped.

Retrieved from "https://fallout.fandom.com/wiki/Silver_wedding_ring?oldid=3461020"
Community content is available under CC-BY-SA unless otherwise noted.
... more about "Silver wedding ring"
RDF feed
Has platform
Xbox One +  and PC +