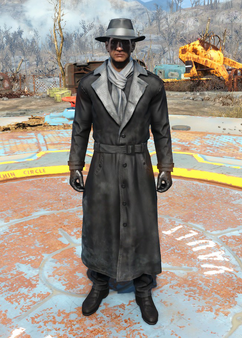 After the quest is finished, and if Kent Connolly survives, he will offer upgrades to the trench coat, the availability of which depending on the player character's level. Whenever a new upgrade is available, the Silver Shroud Radio station will become active when the Sole Survivor is around Goodneighbor, and Kent will state he has a "special delivery" for the Silver Shroud.

Any time the costume is upgraded, it will automatically reach its highest possible level, meaning if one chooses to wait until level 45 to complete the quest, the costume will be raised to its maximum level upon upgrading.

According to Kent himself, he had made modifications to the costume, including a set of combat armor plates underneath the armor itself[1] to complement its protection value, a pre-War flak jacket[2] underneath the trench coat to add protection from ballistic damage, and a series of poly-laminated plates to increase the armor's external protection.[3] None of these affect the outfit's appearance, however.

If you complete the quest after reaching level higher than 45, Kent won't offer any upgrades until you reach level 100. On PC, Using console command set MS04ArmorLevel to 45 and returning to Kent can fix this. This can also happen at lower levels (26-44). If you wish to get the earlier upgrades, you can set the armor's level to 25 or 35 using the console command. [verified]

The costume on a mannequin in Hubris Comics 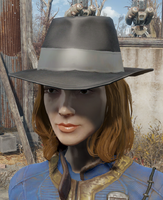