Silver Shroud Radio is a radio station that broadcasts Galaxy News Radio reruns of the pre-War adventures of the hero the Silver Shroud around the area of Goodneighbor. It is run by Kent Connolly, a ghoul from before the Great War that is a fan of the Silver Shroud, and wishes to see his favorite hero come to life.

There are six episodes of the Silver Shroud radio show, which play in order on the station with a Galaxy News Radio opening and closing for each episode encouraging listeners to "tune in next week for another exciting episode." Kent will also broadcast messages over the radio to the Sole Survivor, should they choose to accept the role of the Silver Shroud.

Episode 1: A Slaying in Scollay Square

Episode 2: The Mystery of Mayor Murphy

Episode 3: In the Parlor of Mysteries

Episode 5: Into the Robot’s Den

Announcer: "When evil walks the streets of Boston, one man lurks in the shadows. Shielding the innocent. Judging the guilty. That guardian is... the Silver Shroud!"

Announcer: "What will become of our stalwart hero? Find out what happens next week, on another exciting episode of... The Silver Shroud!"

Prior to starting "The Silver Shroud"

"Calling all Silver Shroud Fans! I got an urgent mission. If you're a true fan stop by the Memory Den and t-talk to Kent Connolly. The Silver Shroud needs you!"

"Calling all Silver Shroud fans. A once in a lifetime announcement. The Silver Shroud returns and he's going to clean up the streets. Everyone heard how Wayne Delancy m-murdered poor Miss Selmy and her kid, over a few lousy caps. Death is coming for you, Wayne."

After Wayne Delancy is killed; Dealing with AJ

Jerry: "Is this thing on? Hello? Hello?"

(Rapid knocking on the door)

Jerry: "Shit? The Shroud offed Wayne? Wait. So this guy's actually for real?"

Kent: "Oh, You better believe it! So, Jerry, Go on! tell the listeners what we're talkin' about!

Jerry: "Right. So AJ, you know the chem dealer by Bobbi's? He's doing good for himself. Says he's got a whole new market. Kids. Even with his garbage chems he's just raking in the caps."

Kent: "You hear that? Sounds like the Silver Shroud has another bad guy to deal with."

Jerry: "Uh... Why? This Shroud guy, he gonna muscle in on the chem trade now?"

Kent: "No. He's gonna do something about it. AJ's selling to kids. And his chems have k-killed people."

After AJ is killed

"Another special update! No, it wasn't Bobbi No-Nose who offed AJ and his goons. It was the Silver Shroud! See his calling card if you don't believe me. Now's our time, listeners, justice is coming to Goodneighbor. You'll see."

"The Silver Shroud's bringing justice to Goodneighbor. You bad guys better look out. And now a special update. The villainous assassin Kendra was recently spotted at the Third Rail. The same Kendra who bombed Little Joe's shack and killed four innocent drifters. If you want to see the Silver Shroud in action, stay near Whitechapel Charlie. The Shroud's sure to interrogate him to find the evil-doer's whereabouts."

After Kendra is killed

"You hear the gunshots outside the gates? Then you heard the work of... the Silver Shroud! Kendra won't be murdering nobody no more because the Shroud delivered his final justice. So don't be shy. You hear of an evil plan? A nefarious scheme? See Kent Connolly at the Memory Den. Change is coming to Goodneighbor!"

"Another headliner. Hancock seeks a special meeting with our hero, the Silver Shroud. Whatever it's about, be careful Shroud, we're all with you.

General (if the player delays)

"It's happening. Even the doubters got to believe - the Shroud's flesh and blood. The Shroud's gone away on an important mission, but don't lose heart. He'll be back. Until then, do what *you* can to help Goodneighbor. Together, we can do it!"

Kent: "Here's a Silver Shroud update. In case you missed it, Kendra's reign of terror is over. She won't be--"

Sinjin: "This is the Shroud's headquarters? So you must be the Silver Shroud's little friend."

Sinjin: "If you want to see your friend alive, Shroud, meet me at Milton General Hospital."

Upgrade pending (only plays once)

1 Fictional locations from the radio play only.

Silver Shroud Radio appears only in Fallout 4 and is mentioned in Fallout 76.[1]

When the Silver Shroud infiltrates the mobsters' hideout, one of the mobsters says "holy cannoli," a catchphrase of Robin in the 1960s Batman TV series.

Second variant of the poster found outside the Memory Den 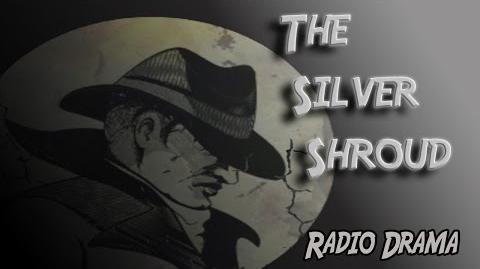