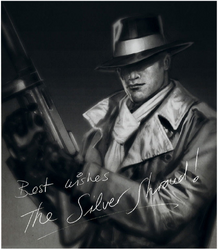 “Death has come for you, evildoer, and I am its Shroud!”— Silver Shroud Radio Episode 1, "A Slaying in Scollay Square"

The Silver Shroud is a fictional character and the protagonist of the the Silver Shroud franchise created by Hubris Comics Publishing. He is a mysterious vigilante who prowls the streets of Boston, terrorizing criminals across the city. He is always depicted wearing a long black trench coat with a silver scarf, a black fedora, and wielding a silver submachine gun as his preferred weapon. His former love interest and regular accomplice, the Mistress of Mystery, is a reoccurring character throughout the series.[1]

Apart from his own franchise, his popularity led to his inclusion in the Unstoppables comic book other Hubris Comics properties and even a televised show that was in planning stages in late 2077.

The Mechanist story arc is divided into six parts, it begins with the murder of Mayor Murphy in Scollay Square. Silver Shroud and Mistress of Mystery kill a pair of thugs responsible for the murder, only to be forced to flee to the Mistress' hideout after Fat Fahey, local crime boss, wounds Shroud in a confused firefight when he happens upon the scene. Although Shroud recovers from his injuries, they are forced to run as Boston Police surrounds the hideout. The duo decides to infiltrate Fat Fahey's operations to learn of his role in the Mayor's death - after all, nobody casually struts through Scollay Square in the middle of the night. Disguising herself as a bar girl, Mistress convinces one of Fahey's gangsters to lead her into his boss' hideout. Once there, she and Shroud try to interrogate the ruffian, only to be attacked by a horde of mobbots.[2]

They emerge victorious after a desperate battle. Fat Fahey turns out to be a robot. The intrepid duo track down his master's location with the help of a damaged mobbot, who craves revenge on his maker. They find the Mechanist at a pier in Boston Harbor, speaking to an army of robots and planning the wholesale destruction of the city. Before they can act, however, they are caught by robots. Suspended over a pit of fire, they are freed by the vengeful mobbot, who gnaws through the rope. The Mechanist attempts to use Silver Shroud's gun against him, but the bullets bounce off his trench coat, mortally wounding the villain. In the closing scene, the Mechanist is revealed to be none other than Mayor Murphy, who faked his own death in order to accomplish his plans, using a robot made to look like Murphy to fool observers. After explaining his motives, he requests medical attention, only for his request to be denied by the Mistress of Mystery, who mocks him for not taking into account Silver Shroud's punishment towards evildoers, much to Murphy's confusion. Silver Shroud then proceeds to kill Murphy with his submachine gun.[2]

The Silver Shroud is mentioned in Fallout 4 and Fallout 76.[4]

Silver Shroud poster
Add an image to this gallery

Retrieved from "https://fallout.fandom.com/wiki/Silver_Shroud?oldid=3226320"
Community content is available under CC-BY-SA unless otherwise noted.