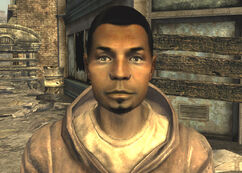 “You want someone dead? Really dead? Stop by the Silver Rush and we'll give you the means!”

The crier for the Silver Rush is a man who is one of only a handful of people who has a job in Freeside and one of three criers in this area. He is employed by the Van Graffs who pay him to boost the public's awareness of their establishment and help bring in customers. He's standing just below the Freeside sign in the second section of Freeside (the section which has the Strip entrance.)

The Silver Rush crier appears only in Fallout: New Vegas.

There may be instances where the Silver Rush crier and the Atomic Wrangler crier become hostile towards each other, which will leave one dead. [verified]