Play sound
Acolytes of the New God Cathedra…
“Silver Rush: Feel the rush of a warm laser in your hand.

The Silver Rush is a location in Freeside, and is the largest retailer of energy weapons in the Mojave Wasteland in 2281. It is located opposite of the Atomic Wrangler Casino.

“The Silver Rush casino was in competition with The Atomic Wrangler until the owners ran afoul of the Van Graff family.”— Fallout: New Vegas loading screens

The Silver Rush is not lacking in security and theft is dealt with swiftly. Energy weapons are not the first thing in mind when thinking about Freeside, so one might think business would suffer, however, Gloria Van Graff boasts that because the Van Graffs do not sell cheap merchandise, their customers do not care where they have to go to purchase from them.[6]

This building serves as the headquarters of the Van Graff family's operations, and as a hub of energy weapon supply in the Mojave Wasteland. The main room is outfitted with a counter, displaying of energy weapons and ammunition. A shelf close to the door has a large amount of ammunition, plasma grenades, and mines.

Down a short hallway in the back of the accessible part of the store is a bathroom. The cashier's room is barricaded and locked. Past the locked door there are some safes, a locked terminal, and a stairway to the living quarters. Five Van Graff thugs are stationed inside, two flanking the front door, two around the cashier room, and one walking back and forth between the two.

The upper floor of the building (directly behind the sign) can be accessed from the second floor of the neighboring ruined building directly to the northwest. The Courier may hop up the debris piles to reach a bedroom, complete with mattress and a small dining table that overlooks the street below.

The Silver Rush is located in the same geographical area as the real world Golden Nugget Hotel and Casino located in the Fremont Street Experience of Las Vegas, Nevada. The former sign, now located at the Neon Museum, resembles the in-game equivalent. 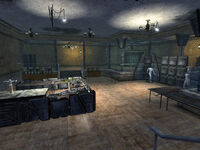 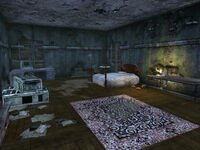 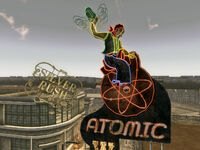 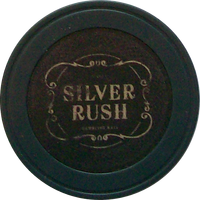