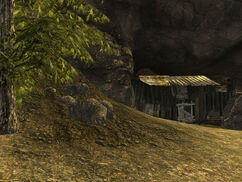 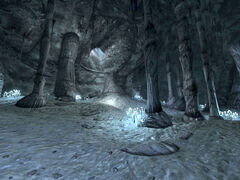 The Silver Peak mine is a location in the Mojave Wasteland, up the rocky embankment to the west of Nevada State Route 157 just off the path to Jacobstown.

The Silver Peak mine is actually connected to the Silver Peak mine shack. The mine is home to many cazadores and the legendary cazador. They entered the mine by means of a hole, high on the wall into the large cavern. Outside are two bighorner bulls which will attack immediately upon fast travel to the location, unless the player character has the Animal Friend perk.

Inside the mine at the back of the great chamber with the cazadores is a tunnel that leads up to the upper level with a number of crates and a gate. Entering this tunnel triggers a number of cazadores and a legendary cazador to spawn in the main chamber. After three days, if the legendary cazador and its "acolytes" are killed, up to seven more will re-spawn (3 x 100% chance, 1 x 75% chance, 3 x 50% chance, unique random encounter).

The Silver Peak mine appears only in Fallout: New Vegas.

Upon fast-traveling to this location a few bighorners, cazadores, and a few giant mantises will spawn right in front of you, this is a very dangerous situation for a low-level player to be in. These animals will respawn every 72 hours and this event will happen again if you fast travel to this location after this time. [verified]

Tumblers Today on one of the lockers on the right

Exterior of the mine 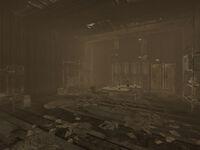 Interior of the shack

Interior of the mine

Explosive crates behind the fence gate
Add an image to this gallery
Retrieved from "https://fallout.fandom.com/wiki/Silver_Peak_Mine?oldid=3208810"
Community content is available under CC-BY-SA unless otherwise noted.