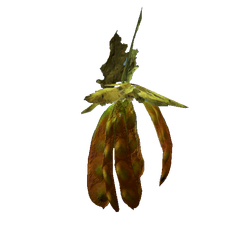 Silt bean is a consumable item in Fallout 4.

Sprouting from the vine of a silt bean plant, silt beans are red pods of legumes that grow in the wilderness, similar in appearance to a red flower at a distance. It is one of four wild plant types (in the base game) that, in Survival mode, provide player character food value, and do not provide their Health buff unless one is already Well Fed.

It is one of the ingredients needed to cook radstag stew, a powerful and long-lasting consumable item. Silt beans are used in the food processor as an ingredient for Salisbury Steak.

Silt bean bush
Add a photo to this gallery
Retrieved from "https://fallout.fandom.com/wiki/Silt_bean_(Fallout_4)?oldid=3423890"
Community content is available under CC-BY-SA unless otherwise noted.