Sneak and run at the same time

Sneak and Run without penalties 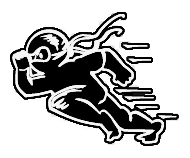 “With this Perk, you now have the ability to move quickly and still remain quiet. You can Sneak, and run at the same time. Without this Perk, you would automatically stop Sneaking if you ran.”— in-game description, Fallout

With this perk, one can use their Sneak skill and run at the same time.

With this perk, one gains +10 Sneak, and running no longer factors into a successful sneak attempt.

This perk drastically increases the ability to crouch-run through buildings to achieve Sneak Attack Criticals. Together with the Chinese stealth armor, the player character is virtually invisible to non-player characters, even when using the Pip-Boy 3000's light.

The effects of this perk are found in the fourth rank of the Sneak perk.

Retrieved from "https://fallout.fandom.com/wiki/Silent_Running?oldid=3539640"
Community content is available under CC-BY-SA unless otherwise noted.