The pre-War version of the silent N99 found in Operation: Anchorage.

The silenced N99 10mm pistol is a silenced small gun in Fallout 3.

This section is transcluded from 10mm pistol. To change it, please edit the transcluded page.

The large-framed, gas-operated N99 was selected as the standard issue conventional sidearm of the United States military, following the phaseout of the N80 in 2051. The long-barreled pistol remained in service for 26 years, until the Great War destroyed the United States. The pistol is designed to withstand the most extreme conditions, which was one of the requirements for a new service sidearm. It can also be repaired easily by anyone with even the most basic technical knowledge. This includes both clearing misfeeds[1] and restoring a unit to working condition after long exposure to elements without maintenance.[2]

These features also make it popular with wastelanders, who appreciate the ease of maintenance. It remains a common weapon, as even though many civilian units were ruined, they can easily be restored by anyone with some repair knowledge. Even damaged units can be used reliably, though they will offer subpar performance and jam frequently. The number of manufactured pistols means that parts are easy to come by, however.[2]

An N99 10mm pistol equipped with a suppressor, which allows for silent kills if the target is killed with the first shot. This stealth feature comes at the cost of durability and damage, but a sneak attack always results in a critical hit, so the lower damage can be compensated for, especially with the Better Criticals perk.

Firing the silenced 10mm pistol will not increase the chance to be detected unless the player character has a very low Sneak skill. It is therefore useful for killing weaker enemies like radroaches, mole rats, and sometimes even raiders, without drawing attention from other enemies. A high enough Small Guns skill makes it a useful close-quarters weapon in office building type settings, such as the Bethesda ruins and the Museum of History.

A fully-repaired silenced 10mm pistol can fire approximately 333 rounds, the equivalent of 28 reloads, before breaking. This is around 223 rounds fewer than the standard 10mm pistol. 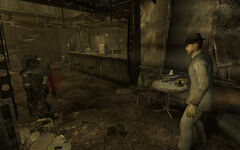 Retrieved from "https://fallout.fandom.com/wiki/Silenced_10mm_pistol?oldid=3185302"
Community content is available under CC-BY-SA unless otherwise noted.