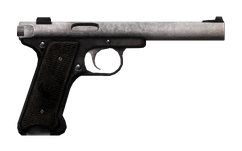 The silenced .22 pistol is a weapon in Fallout: New Vegas.

The silenced .22 pistol is a .22LR round handgun with an integrated silencer. It's classified as a silent weapon and can be used to attack targets without alerting nearby creatures or NPCs to the player character's presence. It also has bonuses to critical hit chance and critical hit damage, making it an effective stealth weapon in tandem with sneak attack criticals. It is a holdout weapon, and as such can be snuck into places where weapons are confiscated.

The silenced .22 pistol can fire a total of about 495 standard rounds, the equivalent of 31 reloads, from full condition before breaking.

The silenced .22 pistol is based on a variant of the Ruger Mk III.[1]

Retrieved from "https://fallout.fandom.com/wiki/Silenced_.22_pistol?oldid=3220115"
Community content is available under CC-BY-SA unless otherwise noted.