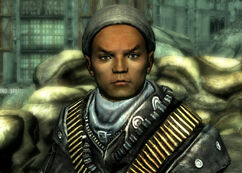 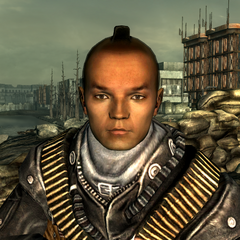 Silas without his wrap

“And stay away from the Memorial. We have orders to shoot first and loot the bodies after.”

Silas is a slaver stationed at the Lincoln Memorial in 2277.

Leroy Walker and his slaver comrades, including Silas, were sent to the Lincoln Memorial by Eulogy Jones just in case any escaped slaves would want to pay homage to "the great emancipator."

Head of State: One will need to kill Leroy Walker, Silas, and the other slavers for the escaped slaves, so they are able to make their permanent move to the Lincoln Memorial.

When approaching the memorial, Silas will stop the Lone Wanderer from heading up the stairs, and informs them that the memorial is "off-limits." If asked, he will lead you to his superior, Leroy Walker, who is stationed inside the memorial office. If the player character has already made an enemy of the slavers at Paradise Falls, Silas will still enter the original encounter speech, but as soon as he finishes, his men will open fire.

Silas remains in the game files of Fallout: New Vegas as legacy content.

Silas appears only in Fallout 3.

Retrieved from "https://fallout.fandom.com/wiki/Silas_(Fallout_3)?oldid=3186206"
Community content is available under CC-BY-SA unless otherwise noted.