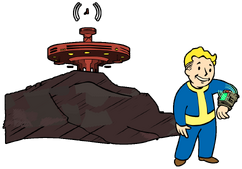 “Rose needs help boosting her signal before she'll trust me. The first thing I need to do is find some signal repeater schematics that were last seen on a Responder's corpse near Seneca Rocks”

Signal Strength is a quest in Fallout 76.

In order to follow Hank Madigan's trail, the Vault Dwellers need to reach the top of the Top of the World. Problem is, a raider named Rose is unwilling to let them access the uplink chamber unless they repair the radio station for her.

The player character cannot access the top level unless they repair the signal. One must travel to the Seneca Rocks Visitor Center and search the bodies there for signal repeater notes and a signal repeater schematic. Look for Major Darion Jones, in military fatigues.

The materials need to be collected next, including an RCX01-A39 duplexer at the 98 NAR Regional wreckage and an SMU-97 transponder at the Horizon's Rest. The transponder is located on the cliffs, inside the derelict airliner's pilot's cabin, on the wall. The duplexer is in the overturned red NAR wagon just next to the state route at the crash.

Once collected, one must combine the two at any tinker's workbench to create a signal booster. With it in hand, head to the National Isolated Radio Array and mount it in the auxiliary dish to the northeast. A group of robots will spawn. These robots are often a group of Mister Gutsies, usually either Lieutenants, Majors, or Colonels. Several of the Gutsies may be legendary enemies as well, meaning that they will explode with the force of a mini nuke a few seconds after death. They also have ballistic weaponry that can down a player character in a few hits due to their high firing rate. After dealing with the robots, reroute the power, listen to Rose's broadcast now that she's able to send it all over Appalachia, and return to Rose at the Top of the World. She will let them up and allow them to "meet" Hank Madigan. This quest is also mandatory to be able to complete Strange Bedfellows as player characters need to be in Rose's good favor before she'll help them meet with Meg and befriend the Raiders.

Retrieved from "https://fallout.fandom.com/wiki/Signal_Strength?oldid=3426434"
Community content is available under CC-BY-SA unless otherwise noted.