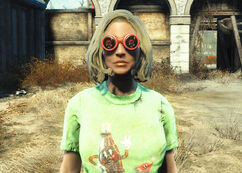 The Nuka-Cola Challenge
Mississippi Quantum Pie
Cappy in a Haystack 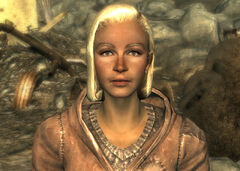 “It explodes in a huge blue flame too! How cool is that?”

Sierra Petrovita is a Nuka-Cola addict living in Girdershade in 2277 and Nuka-World in 2287.

Sierra was born in 2251. In 2277, she is a fair-haired 26 year old woman who shows little regard for matters outside consuming and hoarding Nuka-Cola and collecting merchandise relating to it, much to the dismay of her neighbor Ronald Laren, who remains in Girdershade in the hope of seducing her. Her fanaticism for the drink is without question, as she subsists solely on it. She has spent every bottle cap her parents left her acquiring the drink from merchants, travelers, and towns spread throughout the Capital Wasteland.[1]

In the Fallout 4 add-on Nuka-World, ten years later, she has traveled to an amusement park west of Boston, Nuka-World, in hopes of recovering the Nuka-Cola formula for her collection.

In Fallout 3, Sierra stays in her house all day drinking Nuka-Cola and doing other miscellaneous things. In addition, she hounds passing travelers for any trace of Nuka-Cola Quantum.

In the Fallout 4 add-on Nuka-World, she can be found near Bradberton's office in Nuka-Town USA.

Sierra Petrovita in 2287 without her sunglasses

The completed quest objectives, where one saves Sierra from the ghouls
Add a photo to this gallery