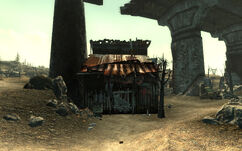 Sierra's home is an average wasteland shack with the exception of the red neon Nuka-Cola sign next to the door and a large amount of empty soda bottles around the door.

Sierra Petrovita's home appears in Fallout 3 and is referenced in the Fallout 4 add-on Nuka-World.

Neon Nuka Cola sign above the bed
Add a photo to this gallery
Retrieved from "https://fallout.fandom.com/wiki/Sierra_Petrovita%27s_home?oldid=3450560"
Community content is available under CC-BY-SA unless otherwise noted.