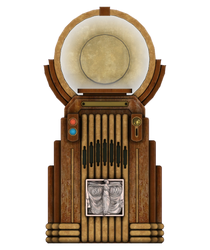 “All of the Madre's and Villa's conveniences were supplied by machines tied to the casino.”— Dead Money loading screens

Sierra Madre vending machines are pre-War devices developed at the Big MT, which dispense and redeem numerous items in exchange for Sierra Madre chips. They can be found throughout the Sierra Madre, and one is found in Elijah's quarters in the abandoned Brotherhood of Steel bunker.

“Where the Vending Machine technology came from is unknown. While they take Sierra Madre Chips, they seem to supply a number of non-commercial services.”— Dead Money loading screen

Created at Big MT at the Y-0 research center, the development of the Sierra Madre vending machines was bankrolled by Frederick Sinclair after witnessing them at a World's Fair exhibit.[1] Willing to bankrupt himself for these devices, Sinclair also struck a deal with the company's executives to use the Villa as a proving ground for various Big MT experimental technologies.[2] The devices he commissioned were intended not just as vending machines, but as emergency dispensers supplying food and resources to ration out in the event of a nuclear holocaust.[3] The machines were also capable of outputting special supplies, such as chems and security and maintenance equipment, restricted with dispenser codes issued only to trained professionals and doctors.[4]

Although Sinclair described them as the means for self-sufficiency for the Madre, others felt that they were a means to ensure that any money spent at the casino would line Sinclair's pockets,[5] especially with the ban on all other vending machines.[6][7] To his employees, the vending machines felt like a company store, as they could barely afford anything with the modest amount of chips they received along with their paycheck.[8]

The Great War and the isolation of the Madre resulted in the vending machines becoming the only known surviving examples of the underlying technology. They remained in the ruins of the Sierra Madre. Around 2281, they attracted the attention of a rogue elder of the Brotherhood of Steel, Elijah. As potentially unlimited sources of "food, supplies, medical assistance, ammo... even currency," Elijah saw that the Sierra Madre "can kill nations and build them" if its Cloud, holograms and vending machines were applied in the correct manner. While the Cloud wipes the slate clean, collars ensure cooperation, holograms provide defense and the vending machines provide everything else.[9]

At the heart of the machine is a revolutionary pre-War technology that never achieved much commercial success outside the occasional World Fair or the Sierra Madre: The vending machine is a self-contained matter transformation device. It can recreate any item (limited by the templates stored in its memory; emergency codes could be used to unlock additional templates, for medical supplies and other restricted items)[10][11][12][13] by using Sierra Madre chips and the alloy they are made from as a battery and source of raw material for the created goods. It can also take certain items and transform them back into Sierra Madre chips. Selection is made through a holographic interface that displays the item being purchased.[14]

As the chips are not some form of nanotech feedstock, but simple alloys of common and fissionable elements[15] (which can be easily manufactured out of common junk, see Coin Operator), the machines use nuclear fission/fusion to process this material not only into tools, but edible food and even prescription chems. The machines demonstrate that civilization was on the cusp of unimaginable prosperity when the bombs fell; a truly great height from which to fall.[9]

The Old World Blues add-on includes an unused, unscripted, partially implemented version of the Sierra Madre vending machine, likely meant to be placed around the Y-0 research center. Called the "Holo-Vending Machine," the object uses the same shape as the vending machines which appear in Dead Money. Though both the mesh (shape) and textures are included for the object, the mesh file references textures as though they are in the "nvdlc01" folder used by Dead Money, rather than the "nvdlc03" folder used by Old World Blues, making it appear incorrectly if viewed without the Dead Money add-on loaded.

Retrieved from "https://fallout.fandom.com/wiki/Sierra_Madre_vending_machine?oldid=3475422"
Community content is available under CC-BY-SA unless otherwise noted.