Play sound
Desert Wind.ogg
“You. You're in the vault... finally. After all this time. The Sierra Madre... mine.

The Sierra Madre vault is a location in the Sierra Madre Casino & Resort in 2281. It is the last location the Courier will go before the end of Dead Money. They must proceed through the lower levels of the casino, passing areas filled with the Cloud, speakers, and holograms to end up in the main vault room.

What the Pip-Boy labels as the "vault" area is actually three areas of "the basement" and then the vault itself. Forcefields in the doorways from the enclosure prevent the player character from being able to simply walk over to the vault. Father Elijah is the only one who can deactivate the forcefields, and he aims to do it only for himself when he comes down to confront the Courier.

The first two areas of the basement are spent shooting, out-running, and deactivating the various speakers along the catwalks that wind through the first two parts of the basement. From the enclosure where the Courier comes into the second catwalk room, there are stairs to the right and another set of stairs on the left that lead up/down to the floor of the room. There is a support beam over the stairs that bridges the gap between the catwalk and the door leading to the next section.

The third area of the basement is more complicated, due to several security holograms patrolling the enclosures and catwalks in the area. There is a shielded speaker to the right upon entering. From the doorway where the room is entered, on the opposite side of the room, there is a long enclosure that runs most of the length of the opposite wall, as well as a very small enclosure in the right corner. The doorway to exit the room is between the two enclosures, and one of the holograms is standing guard next to it. There is also a medium-sized enclosure on the far-right wall that has a terminal that controls the hologram next to the exit. In addition, on the right as the room is entered, there is a set of stairs going down to a lower catwalk level. The Cloud covers the lower catwalk level, and the only way through is to jump from the bottom of the stairs to the next section of the catwalk. At the end of the catwalk is the vault turret terminal password. Grab it and head back up the stairs. Continuing onto the beam just past it will progress out of the Cloud.

The three holograms in the room can be turned off with 100 Repair skill (or good aim) and some climbing. This makes a clear run for later if one aims to lock Elijah inside the vault. To do so, the player character must stay out of his sight and then make a quick dash back to the elevator before he notices he is trapped inside and activates the collar.

While turning the corner after exiting the hologram room, the collar will start beeping while running toward a shielded speaker on the wall outside the force field. There is a terminal that deactivates the weapon turrets and the blue force fields around the vault, allowing access to the vault. However, deactivating the security also triggers the entire sequence of events leading up to the confrontation with Elijah, including locking the elevator until Elijah comes down to the vault, enforcing a point of no return for the player character. There are two entries on the terminal regarding the vault's security. Backing out of the folder shows a third option to disable the vault's security protocols.

The end of the corridor leads into another enclosure on the opposite side of the vault room that was first seen upon leaving the elevator. On the walkway in front of the vault is a holotape, a fairly hostile letter from Sinclair to Vera Keyes, condemning her for lying to him, apparently written after he discovered what Dean and Vera were planning, but hastily ripped out of the computer inside the vault. The Cloud hovers just below the walkway. On the pipes that run below and along the front of the walkway, there is the skeleton of Frederick Sinclair, who apparently met his end at the hands of his own creation. Next to him is a duffle bag with a copy of Nikola Tesla and You inside it. If one jumps down to the pipe to obtain the book from the duffle bag, it is tricky but possible, to jump back up to the walkway.

On top of the enclosure in the middle of the room (facing the vault) is a larger enclosure with some miscellaneous computer equipment inside it, and a pair of weapon turrets on top of it (there are two more around the room, for a total of four turrets). The weapon turrets will be deactivated at this point since the security was switched off from the terminal in the corridor previously.

On the outside of the door to the vault is a single terminal that releases the lock to the vault. Just inside the door is a generator and two more terminals (one on either side of the door) to control the weapon turrets outside the vault and the vault's security systems. Inside the vault, which is only a single room, there is a first aid box with a wide range of chems and medical supplies, and a gun cabinet containing a few sets of Sierra Madre armor and hundreds of .357 Magnum rounds and energy cells, plus a suitcase on top of the locker with more pre-War money and chips.

There is also a table with some Sierra Madre chips, 17 stacks of pre-War money and 37 gold bars, which amounts to 390,239 caps, but 1,295 pounds of weight. Since each gold bar weighs 35 pounds it is almost impossible to leave with more than a few bars if one needs to backtrack to the entrance, but if they sneak out of the vault - staying out of sight by walking opposite Father Elijah as he passes - an overencumbered Courier can make it through the nearest entrance before the forcefield reactivates.

At the far end of the room is another terminal on a round overseer's-type desk. The terminal has two messages for Vera from Sinclair, but the first one says "file not found," which was the holotape out in front of the vault that Sinclair ripped out of this computer, telling Vera that she is now trapped and has become the "heart" of the Sierra Madre, but he had obviously changed his mind as to her fate. The second message is also from Sinclair, who apparently had a change of heart (which was too late) in spite of knowing what Vera and Dean were planning.

There is also an entry strictly for Dean on the computer labeled Sinclair's Personal Accounts. If accessed, one will find a message that was meant for Dean Domino to read. This will cause the vault to lock. If this is done, the game will play a scene in which the voice of Vera Keyes is heard, explaining the events after the Courier had been trapped in the vault. She explains how the casino had actually created a new hologram to fill out duties in the likeness of the Courier. After the scene, the Courier will be shown dying in-game, and the game will load the last save file.

If the Courier ignores the message, upon exiting the terminal, a panel on the wall above opens, revealing a communication screen, immediately beginning a dialogue with Elijah.

To make exploring the Sierra Madre vault easier and safer, the three security holograms found in the third basement room can be removed by destroying (or manually disabling) their emitters (the small bright blue discs) one by one. The emitter for the easternmost hologram is located in the northeastern most metal box, in the corner, on the ceiling. The emitter for the hologram guarding the door to the next corridor is found on an above girder that can be seen and shot at from standing on the far east of the room, or by jumping onto the southeastern metal box and accessing the upper catwalk. The emitter for the hologram guarding the entrance to the area can also be accessed by traversing the upper area, as it is located on top of a metal box, in the western corner.

The Sierra Madre vault is not a Vault-Tec vault, but simply a reinforced secure storage area.

Gold in the vault

Skeleton of Frederick Sinclair and a Nikola Tesla and You 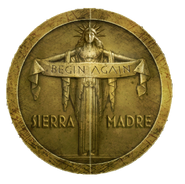 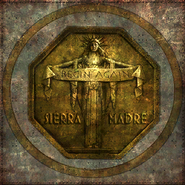