Upon first entering, several speakers are made known to be active nearby, some of which are shielded, and will not be turned off until the casino floor has been visited and completed. The receptionist's terminal found on the welcome desk can activate/deactivate holograms once the player character has located the security code found on the Tampico's front desk terminal. After progressing far enough with quests, ghost people will begin inhabiting the room, since they've found a new way in beside the front door.

The chandelier in the lobby was modeled by Megan Parks.[1]

Three song holotapes are on this terminal 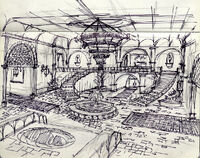