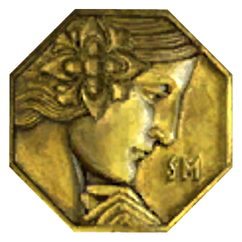 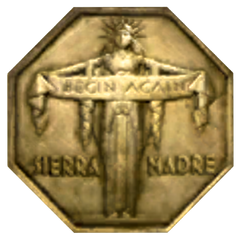 They can be used at Sierra Madre vending machines to purchase items. These items are initially mostly food items, but when the correct vending machine code holotapes are found, medical supplies, ammunition and miscellaneous items can be obtained from the vending machines as well.

Sierra Madre chips can also be used in the Sierra Madre casino to gamble. The Big Winner reward for winning more than 7,500 chips is a complimentary voucher which can be exchanged for 1,000 chips at a Sierra Madre vending machine.

The chips can be exchanged for pre-War money in the Sierra Madre casino, at a rate of one chip for one stack of pre-War money (a value of 10 caps). Gambling at the casino can earn you 10,000 chips before getting banned – this is equivalent to 100,000 caps. 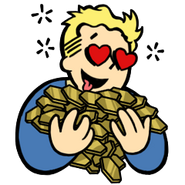 As depicted in Sierra Madre Souvenir Aficionado.
Add a photo to this gallery
Retrieved from "https://fallout.fandom.com/wiki/Sierra_Madre_chip?oldid=3448371"
Community content is available under CC-BY-SA unless otherwise noted.