Dead Money
“It's the moment you've been waiting for, the reason we're all here - the Gala Event, the Grand Opening of the Sierra Madre Casino.”

The main (first) floor of the casino section has the gaming tables and machines, cashier counter, electrical closet, and a vending machine in the center of the room. The second floor has a lounge area just above with a bar. Behind the bar is a corridor with a stairway to the third floor straight ahead, and the personnel and security offices to the right (west). On the third floor, there is the locked entrance to the Cantina Madrid kitchen, another security office with a hologram control terminal for the office guard, a medical office with an Auto-Doc, and through the medical office, a small set of stairs down to a door.

There are three security holograms patrolling the inside of the casino: one near the entrance and the bar stairs, another in the second-floor office area, and a third by the electrical closet and cashier counter. Once the power is activated, the security holograms will disappear and hologram dealers become visible behind the Blackjack tables and Roulette wheels, making the casino games available to play. A cashier hologram appears behind the cashier's window that exchanges pre-War money for Sierra Madre chips.

To make exploring the casino easier and safer, the security holograms can be removed by destroying (or manually disabling) their emitters (the small bright blue discs) one by one. There are three emitters in the casino section, one for each hologram. The emitter for the bar stairs guard hologram is located over the west railing from the lounge area on the second floor, on the surface of one of the rafters, facing upwards. The second emitter, which is for the personnel offices/security offices guard hologram, is located between the personnel office and the security office on the second floor, on the top of the wall behind the doorway, facing to the south. The third emitter, for the closet/cashier counter guard hologram, is on the first floor, hiding just a few steps from the electrical closet door, in the corner by the corridor entry, on the ground facing upwards. The utmost care should be used; if the emitters are shot, the rest of the holograms will be alerted.

One blue speaker can be found behind the bar lounge on the second floor behind a privacy screen.

The Sierra Madre Casino offers Blackjack, Roulette, and Slots. Only four of the slot machines are functional. Blackjack tables can be found in a separate room across from the vending machine. Unlike the casinos on the Strip, the maximum bet for Roulette is 100 chips and only 25 chips for slots. A maximum bet of 200 remains on the Blackjack table.

As the player character earns chips, the casino offers increasing comps and gifts:

Winning 10,000+ chips will result in a permanent ban on playing games in the casino. Receiving a complimentary voucher (worth 1000 chips) unlocks the means to redeem the vouchers at vending machines. This must be done if one wants to be able to redeem vouchers received at the abandoned Brotherhood of Steel bunker upon completion of the add-on. 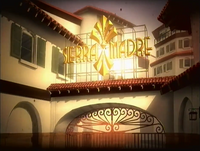 The Sierra Madre Casino, as shown in the introduction scene of the add-on