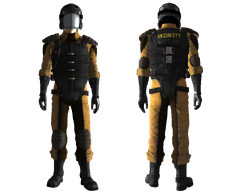 The Sierra Madre armor, reinforced is a piece of armor in the Fallout: New Vegas add-on Dead Money.

With a Damage Threshold of 18, it has the highest DT of any light armor in the game, boasting protection on par with various medium armors and even a few heavy armors as well. It can be repaired with regular Sierra Madre armor, and other light armors can be used to repair it if one has the Jury Rigging perk.

It is very similar to Vault security armor but instead of blue and black, it is orange and black and has armor plates on the shoulders, knees and elbows, and its helmet is a noticeably different design. It also has "SECURITY" written on the back instead of a Vault number. Being a reinforced variant of Sierra Madre armor, it looks very similar to the regular version but with dark brown stripes running down the inside of the legs and chest.

When a Stealth Boy is used in conjunction with this apparel, the imprint "SECURITY" on the back will appear as "101". This is because the armor's normal texture, while a separate file, is visually identical to that of Vault 101 security armor from Fallout 3. [verified] 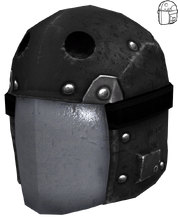