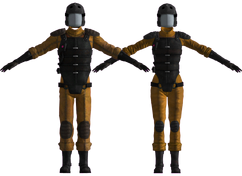 Sierra Madre armor is a piece of armor in the Fallout: New Vegas add-on Dead Money.

This armor was once worn by the security guards stationed inside the Sierra Madre Casino & Resort. It consists of an orange jumpsuit with reinforced knee pads, elbow pads, bracers, boots and a black stab vest with "Security" printed on the upper back worn over it. 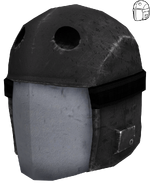