Dead Money
“It's the moment you've been waiting for, the reason we're all here - the Gala Event, the Grand Opening of the Sierra Madre Casino.”— Vera Keyes

The Sierra Madre Casino is more than a mere casino & resort – it is the material testament to one man's inability to let go. Seeing the Great War nearing, Frederick Sinclair, the chief architect and financier of this grand fortress, wished to save Vera Keyes, his love, from the looming destruction. To this end, the Sierra Madre Villa and its capstone casino were built. But that was not enough for Sinclair: deep within the basement of the casino, a nearly impenetrable vault was constructed as well, to make sure he and his love could ride out the apocalypse, together.[2]

Security was of the utmost importance and N.E. was contracted to provide it. Anything foreign or unauthorized that entered the casino was detected by security measures and instantly rendered comatose and moved to another location within the hotel.[3] Further into the casino, an emergency broadcast emitter could be triggered and the myriad of holograms designed specifically for Sinclair would activate, patrol the casino and executive suites, and exercise lethal force on unauthorized visitors to protect the hotel guests under their charge.[4][5] The entire casino was also lined with a metal that interferes with radio reception and broadcasts out of the casino;[6] this was put in place to ensure that the radio frequencies from within the casino would not interfere with the hologram beacon in the Villa, which would send out an emergency signal so others would be alerted to Ms. Keyes' presence within the casino.[2]

After all this preparation, Sinclair failed to anticipate one thing: Vera's complicity with lounge singer Dean Domino's plot to break Sinclair's heart and steal the treasure of the Sierra Madre for themselves. Domino had enlisted her aid in his planned heist, later blackmailing her with evidence of her Med-X addiction, completely unaware that she was terminally ill.[7][8] This news broke Sinclair's heart and he became embittered and vengeful, transforming his shelter into a trap, ensuring the elevator down to the vault only went in one direction, and upgrading his security holograms to make sure that rescue would never come for Vera and Domino.[9] After Vera broke down and confessed everything, Sinclair, fearing he had overstepped himself, did what he could to reverse his changes, but he could only do so much and the casino remained a deathtrap. He died in the vault, unable to return to the casino and his love.[2]

The guests would meet a similar fate, while the Great War occurred outside, they were slaughtered by the automated security, their last calls for help recorded by the systems. Vera Keyes instead met her fate in her hotel room. Her last words to Sinclair were recorded by the system, her holographic form and last words living on as ghosts in the executive suites.

When the second crew arrived in 2281, the casino awoke yet again, its automated security shutting down as its other automatons started back up. Its pre-recorded music and audio files began to play, albeit on now deteriorated equipment. This proved inconvenient, as these unwilling heist members were still wearing their explosive collars, which interfered with their signal to Elijah.[10] Meanwhile, the ghost people gathered at the casino, attempting to get in. After the Courier was able to establish a connection to one of the other floors and access a piece of the music archives (due to their importance, being a workaround to the sound files that were used in the security systems) they find a way in, with more gathering as subsequent floors were reconnected.[11][12][13][14][15]

The main lobby serves as the nexus of the hotel, directing guests to other sections of the resort, including the casino, restaurant, theater, and executive suites.

The casino is the highlight of the hotel. Fully equipped with holographic croupiers and dealers, the casino offers a number of games, including Roulette, Blackjack, Craps and slot machines, in addition to the vending machines and a fully stocked bar, doing well to achieve the opulence Sinclair hoped to achieve.

The Cantina Madrid is the casino's restaurant and kitchen, a pinnacle of high dining. The entire area is filled with flammable gas until the several valves in the kitchen are shut off. Dog wanders the kitchen, arguing with God.

Accessible via an elevator in the lobby, the executive suites consisted of high class bedrooms and suites for the visitors to the Sierra Madre. The area is in a state of greater disrepair than the rest of the casino, with portions of the Cloud seeping in through some of the hallways, and many rooms have large holes in the walls. Even after two centuries, it is still guarded by holograms.

The "vault" is actually comprised of three areas within the basement of the hotel. Through the winding corridors of the basement, the vault is hidden deep within, guarded on all sides with Mk. III automated turrets. Inside is an impressive cache of supplies, prepared to wait out the war. Of little importance after a nuclear attack, there are a few small pyramid stacks of gold bars (far too much to take all of it), as well as a considerable amount of pre-War money. At the far end of the chamber sits Sinclair's terminal, containing a few bitter goodbyes. This room was where Sinclair had hoped to trap Dean Domino, locking himself inside and passing away within its impenetrable walls.

Several ghost people may spawn in the lobby after entering the other levels.

The chandelier in the lobby was modeled by Megan Parks.[16]

Resort in the Cloud 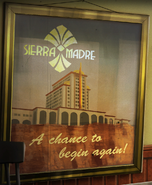 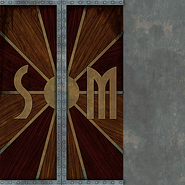 Lobby mosaic before the war

Lobby mosaic after the war

Back of in game Sierra Madre Caravan cards 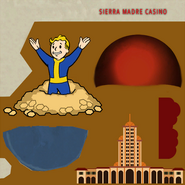