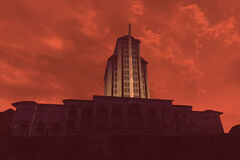 “The strength of the Sierra Madre broadcast is unusual, as is the frequency, normally reserved for emergency broadcast signals before the war.”— Loading screen

The Sierra Madre Broadcast is a radio station in the Mojave Wasteland. It is acquired automatically upon loading a game after downloading and installing the Dead Money add-on.

The broadcast advertises and invites Mojave travelers to the grand opening of the Sierra Madre Casino & Resort, causing them to mysteriously vanish and never be heard from again. Receiving this radio signal starts the quest Sierra Madre Grand Opening!

The message in the broadcast stars the voice of Vera Keyes, a starlet before the Great War whose hologram can be found at the fountain in the Sierra Madre Villa and throughout the hotel. The message can also be heard around the fountain when one arrives at the casino.

Has your life taken a turn? Do troubles beset you? Has fortune left you behind? If so, the Sierra Madre Casino, in all its glory, is inviting you to Begin Again. Come to a place where wealth, excitement, and intrigue await around every corner. Stroll along the winding streets of our beautiful resort, make new friends... or rekindle old flames. Let your eyes take in the luxurious expanse of the open desert, under clear starlit skies. Gaze straight on into the sunset from our Villa rooftops. Countless diversions await. Gamble in our casino, take in the theater, or stay in one of our exclusive executive suites that will shelter you - and cater to your every whim. So if life's worries have weighed you down... if you need an escape from your troubles... or if you just need an opportunity to begin again, join us. Let go and leave the world behind at the Sierra Madre grand opening, this October. We'll be waiting.

Once the Trigger the Gala Event quest is complete, the message changes to the Gala Welcome Message

Everyone, please, may I have your attention. Guests, and residents of the Villa alike, I ask you to step outside and look to the night sky. It's the moment you've been waiting for, the reason we're all here - the Gala Event, the Grand Opening of the Sierra Madre Casino. You are the ones who have made this momentous occasion possible, and for that, we thank you. So raise your glass in celebration - let music fill the streets, fireworks light the sky, and promise of new beginnings fill your hearts. No matter what your fortunes, no matter what your cares, let go this night, and begin again. I suggest you hurry, though - the gates of the Sierra Madre are open, but only for a brief time. After that, the doors will close for the evening's festivities, and won't open again until morning.

After the conclusion of Heist of the Centuries the message changes to the following farewell:

Wait a moment, before you go. I... we... hope you've enjoyed your stay. Farewells can be a time of sadness. Letting go... difficult. As a guest of the Sierra Madre, you know that truth more than anyone. Frederick Sinclair believed one's life could be made anew every day, that fortunes were more than the wealth in your hands.Love. Life... family, those to care for, and those who will care for you. To those who know these joys, the Sierra Madre holds little they don't already have. Out in the world, beyond these walls, that is your chance to begin again. I hope you'll return, in happier times. Until then, the Sierra Madre... and I... will hold you in our hearts.