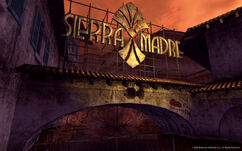 Play sound
City of the Dead.ogg
“The Sierra Madre was believed nothing more than a Mojave legend, a fabled City of Gold, where fortune could be found.”— Fallout: New Vegas loading screen, Dead Money

The Sierra Madre is a pre-War casino resort close to the Grand Canyon,[1] a dead city surrounded by a poisonous cloud. Many travelers and prospectors alike in the Mojave have sought out the legendary city after claiming to have heard a woman's voice on a pre-War radio broadcast, never to be heard from again. Only one man truly "found" it and lived. The Courier is lured to the Sierra Madre by that same broadcast advertising the gala grand opening.

“The Sierra Madre chief architect and financier was Frederick Sinclair. The casino was intended as a place for guests to reverse their fortunes and "begin again."”— Fallout: New Vegas loading screen, Dead Money

The city and the resort and casino were designed and built by one man, Frederick Sinclair, his last venture a few years before the Great War. The Sierra Madre, especially the casino, was intended as a place for guests to reverse their fortunes and "begin again." During its construction until the end, it remained a reclusive area. All conveniences were supplied to the inhabitants by unique vending machines, which provided a number of commercial and non-commercial services, and allowed the residents to live in self-sufficiency, even when cut off from the outside world. The goal of the entire enterprise was not only to create a great casino - it was to create the perfect shelter from the nuclear holocaust. Every element of the Sierra Madre's functions is to protect its inhabitants.

In design, Sinclair was drawn to the nostalgic Art Deco era. This is reflected in the architecture of the villa and of the casino. To make it a perfect opening gala, Sinclair strengthened its frequency emissions, normally reserved for emergency broadcast signals before the war. The kitchens of the Sierra Madre aimed for a 5 star rating, and sought to bring in the best chefs from around the world. In order to meet deadlines and budgets, the construction of the Sierra Madre was handled by two different companies, a well performing company for the casino and a cheaper, slacking, corrupt company for the Villa, creating numerous incidents during the construction of the Villa.

As guardian of his paradise, Sinclair forbade any other food or vending machines beyond the ones he'd installed there and banned any personal contraband like chems, alcohol, and "foreign substances", which created a black market from the workers within. Part of Sierra Madre security's role was to prevent such contraband from entering the Villa area. They were known to have conducted inspections of the Puesta del Sol construction offices, confiscating prohibited items.

Obsessed with security, believed due to his own financial losses in the 2070s, Sinclair installed holograms, a futuristic technology purchased on an exclusive contract by Sinclair. The doors of the Sierra Madre were designed to hermetically seal in case of emergency and the speakers were shielded to prevent vandalism. The Sierra Madre Casino & Resort was equipped with an automated front desk that would escort guests to their rooms upon arrival; and security systems that would stun those entering with foreign substances or contaminated by radiation.

There is also a darker side to the Madre. In return for the technologies supplied by Big MT, Sinclair agreed to have the casino and the villa act as proving grounds for various experimental technologies such as the saturnite alloy, hazmat suits and prototype matter recombinators. Sinclair was oblivious to the fact that previous such deals did not work out too well (as is the case with Hopeville and its disastrous meteorological research project). In the Sierra Madre, the catch came in the form of the Cloud, a strange toxin created in the laboratories of Big MT.

The Sierra Madre Villa was the private city of the guests, employees and workers of Frederick Sinclair, situated just before the casino. The streets were built so that cars can not circulate, preventing pollution and noise nuisance.

In addition to the main area, the Villa was composed of four districts:

To avoid having to spend too much money for the construction of the villa at the expense of the casino, it was poorly constructed. The material used for the Villa's construction was "sand barely held together with spit and glue." Buildings and structures in the Villa were completely unstable and could collapse overnight. All of this caused construction crews to suffer numerous setbacks and accidents. To prevent this discovery on the part of employees of the Sierra Madre, senior persons destroyed all medical reports, and were also protected legally. In addition, shipping problems also plagued the Villa. Construction explosives, countless crates of steak knives, and more were shipped to the Villa, paid for, and left.

This section is transcluded from Sierra Madre Casino & Resort. To change it, please edit the transcluded page.
“The world's most famous stars and entertainers were invited to the Sierra Madre Grand Opening. An invitation was a sign of... exclusiveness. The opening was supposed to symbolize a brighter future, not just for the world... but for all who came to its doors. A chance for anyone to begin again. Except – the Sierra Madre never opened. The war froze it in time, like a big flashbulb going off. The Grand Opening - one big ending of humanity. It's still out there in the Wastes, preserved, just waiting for someone to crack it open. But getting to it. That's not the hard part. It's letting go.”— Elijah

The Sierra Madre Casino is more than a mere casino – it is the material testament to one man's inability to let go. Seeing the Great War nearing, Frederick Sinclair, the chief architect and financier of this grand fortress, wished to save Vera Keyes, his love, from the looming destruction. To this end, the Sierra Madre Villa and its capstone Casino were built. But that was not enough for Sinclair: deep within the basement of the Casino, a nearly impenetrable vault was constructed as well, to make sure he and his love could ride out the apocalypse, together.[2]

Accordingly, security was of the utmost importance and National Electric was contracted to provide it. Anything foreign that entered the casino was detected by security measures and instantly rendered comatose and moved to another location within the hotel.[3] Further into the casino, an emergency broadcast emitter could triggered and the myriad of holograms designed specifically for Sinclair would activate, patrol the casino and executive suites, and exercise lethal force on unauthorized visitor to protect the hotel guests under their charge.[4][5] The entire casino was also lined with a metal that interferes with radio reception and broadcasts out of the casino;[6] this was put in place to ensure that the radio frequencies from within the casino would not interfere with the hologram beacon in the Villa, which would send out an emergency signal so others would be alerted to Ms. Keyes' presence within the casino.[2]

After all this preparation, Sinclair failed to anticipate one thing: Vera's complicity with lounge singer Dean Domino's plot to break Sinclair's heart and steal the treasure of the Sierra Madre for themselves. Domino had enlisted her aid in his planned heist, later blackmailing her with evidence of her Med-X addiction, completely unaware that she was terminally ill.[7][8] This news broke Sinclair's heart and he became embittered and vengeful, transforming his shelter into a trap, ensuring the elevator down to the vault only went in one direction, and upgrading his security holograms to make sure that rescue would never come for Vera and Domino.[9] After Vera broke down and confessed everything, Sinclair, fearing he had overstepped himself, did what he could to reverse his changes, but he could only do so much and the casino remained a deathtrap. He died in the vault, unable to return to the casino and his love.[2]

The guests would meet a similar fate, while the Great War occurred outside they were slaughtered by the automated security, their last calls for help recorded by the systems. Those that weren't were trapped in their rooms, this was the fate of Vera Keys. Her last words to Sinclair being recorded by the systems, her holographic form and last words living on as ghosts in the executive suites. She chose to take her own life using the drugs that kept her alive, after writing her final words "Let Go". Eventually the Casino and Resort went idle, as there was no one left inside.

When the second crew arrived in 2281, the casino again awoke. Its automated security shutting down as its other automatons starting back up. Its pre-recorded music and audio files began to play, albeit on now deteriorated equipment. This would continue to prove inconvenient, as these unwilling heist members were still wearing their explosive collars, which would interfere with their signal to Elijah.[10] Meanwhile the ghost people would gather at the casino, attempting to get in. After the Courier was able to establish a connection to one of the other floors and access a piece of the music archives (due to their importance as they were work-around integral to the sound files that were used in the security systems) find a way in.[11][12][13][14][15]

This section is transcluded from Cloud. To change it, please edit the transcluded page.
“Cloud wasn't always here. Grew over the years, even without cars or factories.”— Dean Domino

The Cloud is not a natural occurrence; it is an artificially created toxin produced in Big MT not long before the war. It was deployed in the Sierra Madre as part of a greater experiment, using the casino and the Villa as testing grounds - with Sinclair completely unaware of this. The hazmat suits worn by the ghost people were a follow-up experiment to the Cloud, something many researchers in Big MT found disturbing. It is also pointed out in terminals at the Big MT research facilities that Sinclair was aware of the experimental state of the suits, but not of the Cloud.

The toxins were seemingly meant to force the usage of the newly created Auto-Docs. During the construction of the villa, construction crews discovered the gas backed up in the Sierra Madre's ventilation system and attempted to inspect it. Even trace amounts of the gas proved to be harmful. Hazmat suits that were also developed in the Big MT were ordered by the workers with the hopes that it would protect them. Unfortunately, this wasn't the case; the workers were still exposed to the Cloud and the fastenings of the suits were corroded, trapping the exposed workers inside to the point where they had to be cut free with a cosmic knife. The exposed workers were sent to the medical district, and concerns were raised about the gas building up beneath the streets.

By the time the Courier arrived two hundred years after the War, a number of the fans in the main ventilation system had gone offline, and the Cloud had completely engulfed the casino and villa, somehow preserving it despite the decades of disuse. Elijah sees the potential in this, and wants to use the Cloud in his new world, using it to preserve and cleanse Old World technology. He also plans to use it as an offensive technology, unleashing it upon the Mojave, cutting it off from the rest of the world. He could then use modified REPCONN rockets to wipe out the New California Republic (NCR) at Hoover Dam, and finally let traces of it drift west to NCR territory, killing outlying communities there. He would then presumably reset the fans of the ventilation system to remove most or all of the Cloud around the Sierra Madre. 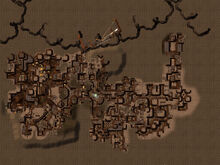 Sierra Madre before the war 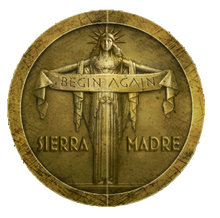 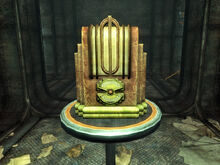 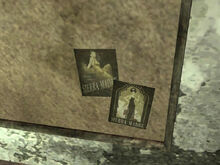 Sierra Madre postcards on the wall in the east pump station, in the Mojave. Hints for Dead Money were given early on 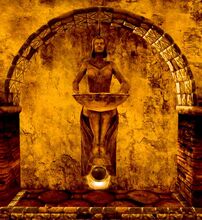 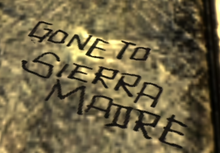 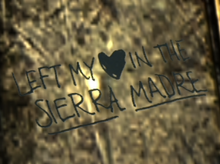 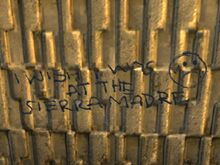 Retrieved from "https://fallout.fandom.com/wiki/Sierra_Madre?oldid=3127458"
Community content is available under CC-BY-SA unless otherwise noted.