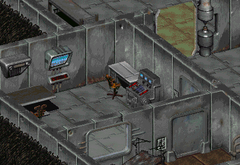 The Sierra Army experiment log (also known as experiment holodisk) is a holodisk in Fallout 2.

Found in a desk near the organ extractor on level 4 of the Sierra Army Depot.

June 28, 2077
Today the boys in bio storage played a great joke on me. One of the little pranksters altered the settings on my Vault-Tec automated organ extractor. Boy, was I surprised when Private Callow came out of the operating room without a colon. Good thing he was dead already or I'd be in trouble. I hardwired the machine to extract only brains so this wouldn't happen again. I'll get them back for this.

June 29, 2077
I removed Private Callow's liver and cooked it. I then had it sent down to the boys in bio storage with fava beans and a nice Chianti. They think it was a special thank you from the general for a job well done. I love my job.

June 30, 2077
I tried a new drug cocktail of Buffout and Psychos on one of my patients and mixed with some special enhancers I've been toying with. The results were promising, if not messy. The subject became very violent and managed to break out of his room. Luckily, the new security robots were in place and managed to subdue him. I'll have maintenance come down and replace that door.

July 1, 2077
My favorite experiment died. I've been feeding him a steady diet of Mentats mixed with my special enhancers. He went from an IQ of 39 to an IQ of 200 in just a few weeks. I am saddened since he was one of the few people I could really talk to. He will be sorely missed.

July 5, 2077
We think the new Cybernetic Brain is finally ready. We have to run some more tests, but it looks promising.

July 6, 2077
Robotics isn't happy that their precious computer is being modified to run the base's security for the evacuation. I can't say I'm happy either, since Skynet has been invaluable in the development of the new cybernetic brain.

July 9, 2077
The evacuation has been moved up. What rotten timing. We were just about to start on the installation of the new cybernetic brain. They say the evacuation is temporary, so I'll get to continue my research when I come back. This will probably be my last log for some time, since I will be busy gathering up as much of my research as possible.