Siege of Hopeville and Ashton 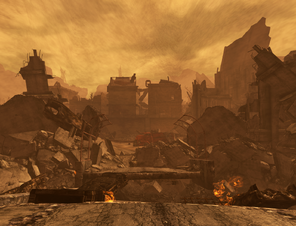 A small survivalist community established itself in the area at an unknown point in history. Kept alive, it prospered, and more settlers moved into the new city. It prospered enough in fact, to draw the attention of the New California Republic, who began to annex it swiftly for a newly established supply line across the treacherous Divide into the Mojave Wasteland.

These actions drew the attention of Caesar's Legion, which, in its bid to take the Mojave Wasteland, attempted to cut the new supply line (the Long 15 and New Canaan were the two first), sending frumentarii and assassins to explore the area after a sizeable force of legionaries struck against the Republic's forces located there. But this war did not destroy the settlement. That was the work of the Courier in 2277, who, returning to the area again, carried a package from Navarro by order of the NCR, containing the activated ICBM detonator to the Divide, a short time before the NCR and the Legion jumped at each other's throats. When this device was close enough, it remote linked with the ICBM computers, sending a signal to the dormant nuclear missiles lying in the silos beneath the ground. They then began detonating one after another, splitting the earth, cracking and twisting the landscape, causing massive earthquakes.

Entire companies of NCR soldiers in the Divide were trapped together with their Legion foes. The disaster created the Divide as it exists now: a wind-beaten maze of twisting canyons, skin-flaying dust storms and horrific abominations.

The Siege of Hopeville and Ashton is mentioned in the Fallout: New Vegas add-on Lonesome Road.

Retrieved from "https://fallout.fandom.com/wiki/Siege_of_Hopeville_and_Ashton?oldid=3137720"
Community content is available under CC-BY-SA unless otherwise noted.